Give us a call to schedule your dental appointment

Periodontal disease, also called gum disease, is the leading cause of tooth loss in adults. There are several types and stages of the disease, all of which start with an infection of the gums that can move to the bones and ligaments that support the teeth. In the early stages, it is often detected by a dentist or dental hygienist during regular check-ups. If gum disease progresses and bone becomes damaged so badly, teeth may fall or be removed.

If you don’t take care of your gums and teeth, they can start to hurt. That’s why it’s important to come in for regular check ups. 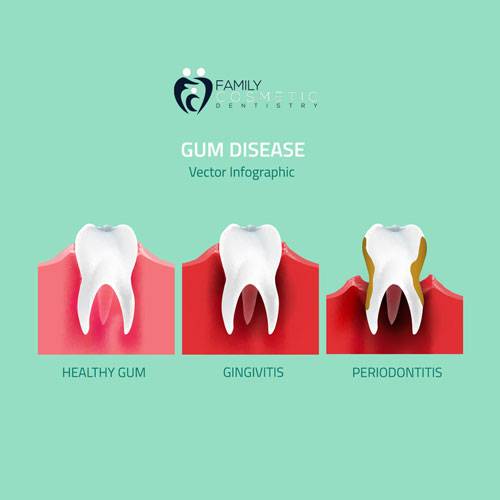 The main cause of periodontal disease is the interaction between the bacteria found in the plaque, the adhesive film, practically invisible that accumulates in the teeth every day, and the response of the body to that bacteria. These bacteria create toxins that irritate and inflame the gums. This inflammatory process destroys the tissues of the gums and causes them to separate from the teeth. If left untreated, the disease progresses to damage the underlying bone. When the plaque is not removed from the teeth regularly, it forms a hard and porous substance called calculus or tartar. If the calculus forms on the roots of the teeth below the gum line, it irritates the gums even more and contributes to a greater accumulation of plaque and diseases. Only a dentist or dental hygienist can remove plaque and calculus of teeth.

Once the bacteria in plaque have created inflammation and damage to the gum tissue occurs, a number of other factors can contribute to the severity of periodontal disease and the rate at which it progresses. Among them are:

What are the stages of Periodontal Disease?

Healthy gums are firm, pink and do not bleed. In the earliest stage of periodontal disease, called gingivitis, the gums begin to turn red and swollen and may bleed during brushing or flossing. Plaque and tartar can accumulate in the gum line, but the bone that holds the teeth is still healthy and removing the irritants will restore tissue health.
The next stage of periodontal disease is called periodontitis. At this stage, the gums begin to separate from the teeth, the underlying bone is damaged, pockets are formed and, sometimes, the gums recede. The Bacterialaden plate extends into the pockets, which makes it harder to keep the surfaces of the teeth clean and control the disease process.
In advanced stages of the disease, the pockets continue to deepen and there is greater destruction of the underlying bone. In addition, the bacteria that live in these deep pockets are more virulent and contribute even more to the progression of the disease. If left untreated, the teeth will eventually loosen and fall off.

How can Periodontal Disease be treated?

If the periodontal disease is diagnosed in the initial stage of gingivitis, it can be treated with a complete professional cleaning. If the disease has progressed beyond gingivitis. For periodontitis, the treatment may involve a process called “deep cleaning” or “root planning”, which consists of cleaning and smoothing the root surfaces of the teeth to eliminate stones and bacterial deposits below the gum line so that the gums can heal around you This procedure may require several appointments, depending on the extent of your periodontal disease. In cases of advanced periodontitis, when deep pockets have formed between the teeth and gums, surgery may be necessary to allow the dentist to thoroughly clean the roots of the teeth and remove the pockets. When there is not enough existing chewing gum, a gum graft can be performed. In some cases of periodontal disease, when the gum and bone have been partially destroyed, certain surgical techniques can help the regeneration of these tissues. There are also new advances in medicines for the treatment of periodontal disease. The local administration of antimicrobial drugs or antibiotics, as well as drugs that control the response of organisms to the bacteria that cause diseases, can help to delay the progression of the disease.

What are the symptoms of Periodontal Disease?

Although the first symptoms of periodontal disease can only be detected by a dentist, there are other indicators that begin to appear as the disease progresses. Symptoms such as:
• Red, swollen or sensitive gums
• Gums that bleed while brushing or flossing
• Teeth that have been moved or loosened
• Pus between the teeth and gums
• Persistent bad breath
• Teeth that seem longer because the gums have receded
• Gums that have separated from the teeth
• Changes in the way teeth meet when biting
• Changes in the way partial dentures fit together
If you have any of these symptoms, you may have some type of periodontal disease and you should consult your CDA member dentist. Then, he or she will measure the depth of the pockets between your teeth and gums and will take x-rays to see if damage has occurred to the supporting bone. If, after this evaluation, your CDA dentist determines that you have periodontal disease, there are a number of treatments that he will suggest depending on the severity of your situation.

How can Periodontal Disease be prevented?

The best way to prevent periodontal disease is to practice good oral hygiene. Brushing and flossing every day, eating a balanced diet and regular check-ups with your dentist are essential to keep periodontal disease at bay. And by doing so, it will increase your chances of keeping teeth for a lifetime

We Love To See You Smile!

The purpose of our Weston Dental Team is to offer you with a pleasant and relaxed dental experience. Above all, we attempt to make your experience completely transparent, so the outcome is precisely as you predicted and our dental procedures meet your expectations. 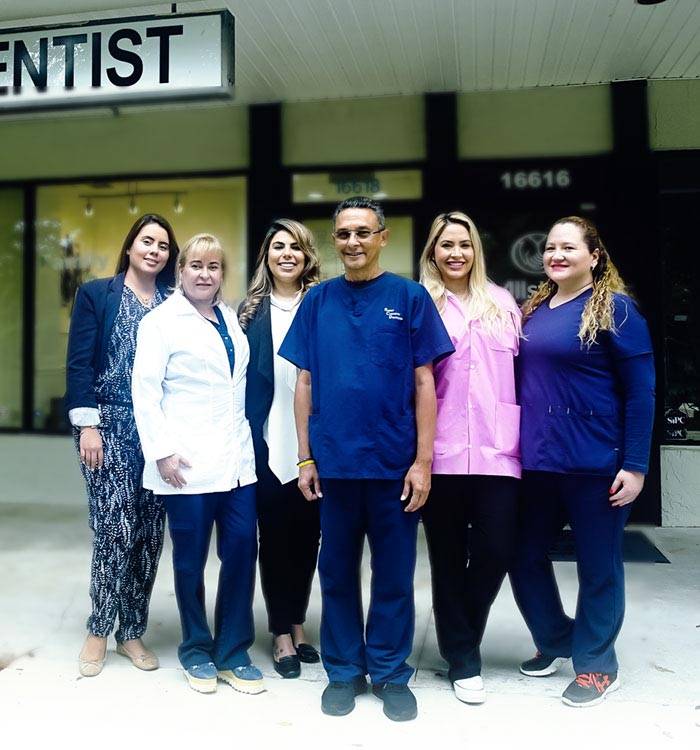